After One Year Of Covid-19, America’s Retirement Crisis Is Little Changed

A year has come and gone since the beginning of the Covid-19 pandemic in the United States in March 2020, upending all of our lives.

Hundreds of thousands of Americans have lost their lives, millions have lost their jobs and practically every kid (and parent) in America has endured school at home for months on end. We’ve changed how we work, how we shop and how we socialize.

But there’s one thing that hasn’t changed: retirement. Despite concerns that folks might raid their 401(k)s or companies would axe benefits en masse, most workers saved for retirement in 2020 much as they would any other year.

To be sure, there are nuances to this outlook, and surveys show that some respondents have altered their views on their retirement plan thanks to pandemic dislocations or job loss.

But the big picture remains roughly the same today as it was a year ago. About half of Americans are still caught up in a retirement crisis without end, with little access to workplace retirement plans, forgoing retirement saving to meet more pressing needs. Many still lack the wherewithal to get started in the first place.

Social Security remains the most important retirement savings vehicle for most Americans.

Half of Americans still rely on Social Security checks for half of their income—nothing about Covid-19 and massive policy responses from Washington, D.C., have changed this stubborn fact. And Social Security still delivers a lower standard of living for the beneficiaries who rely upon it most since it typically replaces only about 40% of a beneficiary’s pre-retirement income.

Social Security is a pay-as-you-go plan: Workers pay taxes that fund the benefits of people receiving checks today. But these Social Security taxes still aren’t enough to fully fund those payments—the balance comes out of the Old Age and Survivors Insurance (OASI) Trust Fund, which holds surpluses from years past. 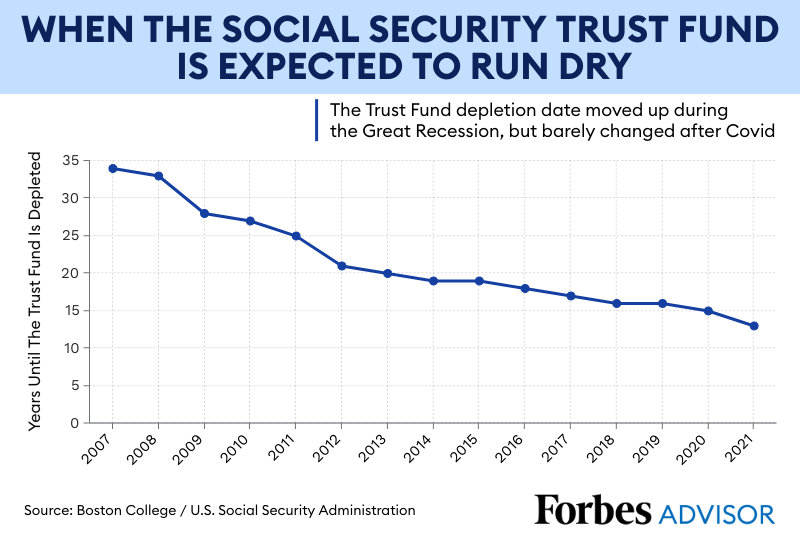 The math nerds at the Social Security Administration use two measures to show the state of Social Security’s finances: An estimate of when the trust fund will run out of money and the overall program’s 75-year surplus/deficit ratio.

The Covid-19 crisis hasn’t impacted either measure all that much, especially compared to what happened during the Great Recession a decade ago. During the last crisis, millions were out of work for years on end. Economists expect a much faster recovery this time.

Social Security reform is a Biden administration priority that will require some combination of higher taxes and lower benefits to ensure payments don’t drop off a cliff when the trust fund is depleted.

One big driver of Social Security’s woes is that Americans are having fewer kids than they used to. Since it’s a pay-as-you-go plan, fewer kids means fewer future taxpayers, which means less revenue for Social Security. 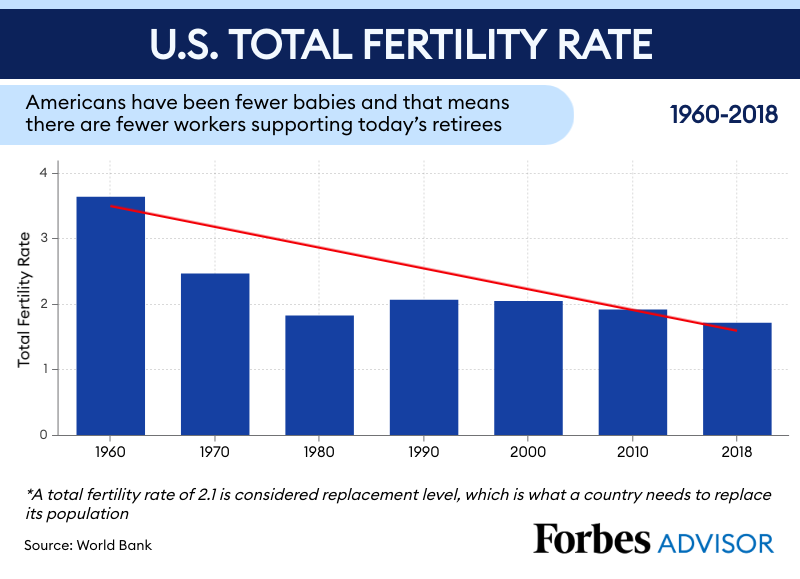 U.S. fertility rates have been on the decline for 30 years, but they moved sharply lower after the Great Recession. A recent paper published in Frontiers of Public Health looks at past epidemics and projects fertility rates will decline in the immediate term following the current pandemic, with a recovery due at some point in the future.

Of course the U.S. could also allow more people into the country.

“There are other ways to add people, like immigration,” said Alicia Munnell, director of the Center for Retirement Research at Boston College. “If we get worried about our population, we have this option.”

Social Security’s long-term solvency is one thing; when you decide to claim benefits is another altogether. The earliest you are eligible is when you turn 62, and you must start taking checks by the time you turn 70. The longer you wait, the higher your monthly benefit, but delaying is tough for those who can’t work any longer or have insufficient retirement savings.

Before the pandemic, 62 was far and away the most popular age to claim Social Security—that trend will likely continue.

A 2021 survey from Allianz, the European insurance behemoth, found that 68% of respondents said they had retired earlier than they wanted, up from 50% the year prior. Meanwhile a recent Pew Research Center survey found the pace of retirement among Baby Boomers rose dramatically: In 2019, 1.5 million more Boomers retired than the year before. In 2020 that figure jumped to 3.2 million.

Social Security is a key part of America’s retirement tool kit, but tax-advantaged retirement accounts are equally important. As the U.S. slid into crisis one year ago, analysts were worried that Covid-19 would undercut people’s long-term savings in 401(k)s and individual retirement accounts (IRAs).

In dark economic times, companies tend to reduce benefits like employer 401(k) matching contributions. Meanwhile, workers tend to cash out their retirement accounts when they leave a job or need to pay bills. Withdrawing retirement savings means forgoing long-term gains from appreciation. It can also result in additional taxes and IRS fees.

The good news is that contrary to these worries, employers and workers left their retirement accounts alone for the most part.

According to a November 2020 survey by the Plan Sponsor Council of America, nearly 95% of employers indicated they had not changed their retirement plans. That’s a much better outcome than what went down during and after the Great Recession. 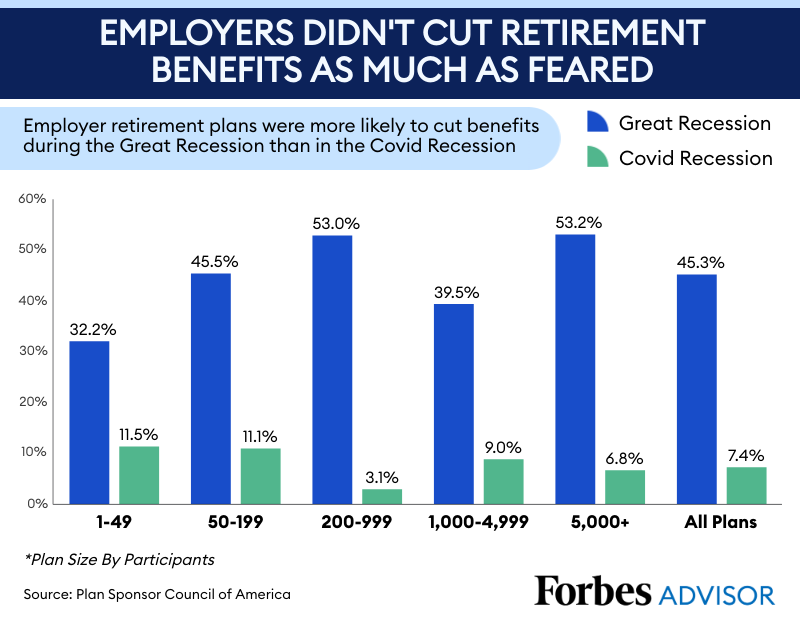 The CARES Act made it easier for people to take an emergency withdrawal of up to $100,000 from their IRA or 401(k) in 2020 if they were impacted by Covid-19. Among other changes, CARES nixed the 10% IRS penalty on certain early withdrawals and allowed you to spread the tax burden on withdrawals over three years. Pre-Covid, some employer-sponsored retirement plans let you borrow up to $50,000 from your workplace plan balance. The CARES Act doubled that limit to $100,000.

Despite these special allowances, the Plan Sponsor Council of America survey showed only a minor increase in the number of people taking withdrawals or loans. 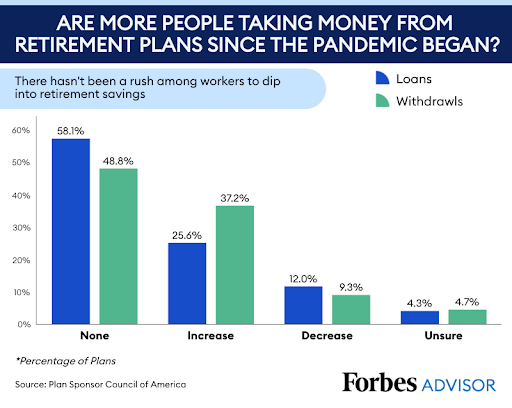 A recent report by investment giant Vanguard puts an even finer point on the subject. Among the firm’s employment plan sponsors:

Plan participants who left their money alone enjoyed a banner year for stocks, with the S&P 500 total return jumping 16% in 2020.

According to Vanguard, the typical person making a withdrawal was a 42-year-old earning a bit more than $61,000. If we take this median withdrawal of $13,300 and age of 42, and assume a 4% inflation-adjusted rate of return for 25 years—when the average saver would reach full-retirement age—they’d miss out on about $35,000 in retirement savings.

This back-of-the-envelope calculation gets bleaker when you consider that people who were taking emergency distributions may have lost their jobs and spent months looking for work, further cutting into financial solvency.

A home can be both a valuable retirement asset and a money pit. Oddly, the events of the past year may have improved both sides of the coin for homeowners.

According to the BLS, roughly four out of five seniors are homeowners. Nearly a quarter of senior homeowners are still paying off a mortgage while 55% own their home outright. A little more than a fifth of seniors rent their homes.

Home equity represents about 12% of the wealth of a median household helmed by someone between 55 and 64, according to Boston College’s latest calculations. This makes home equity the third biggest asset for the median household approaching retirement, after future Social Security claims and pensions. It’s a bigger asset than the median retirement account balance.

This means that the vicissitudes of the housing market are critical for retirement planning—and home prices usually plummet in a recession. One year ago, senior homeowners were justifiably anxious that a dramatic increase in joblessness—the unemployment rate nearly hit 15% in April 2020—would crush demand and undercut their home values.

Looking back at the Great Recession, history shows that the median home price dropped from about $240,000 before the crisis to about $214,000 in its aftermath.

A strange thing happened during Covid-19, however: Home prices surged.

During the Covid-19 recession, the largest source of wealth for seniors outside of guaranteed income from Social Security or a pension rose appreciably. One reason is historically low borrowing costs: Mortgage rates were already low heading into the pandemic and only declined during the crisis. 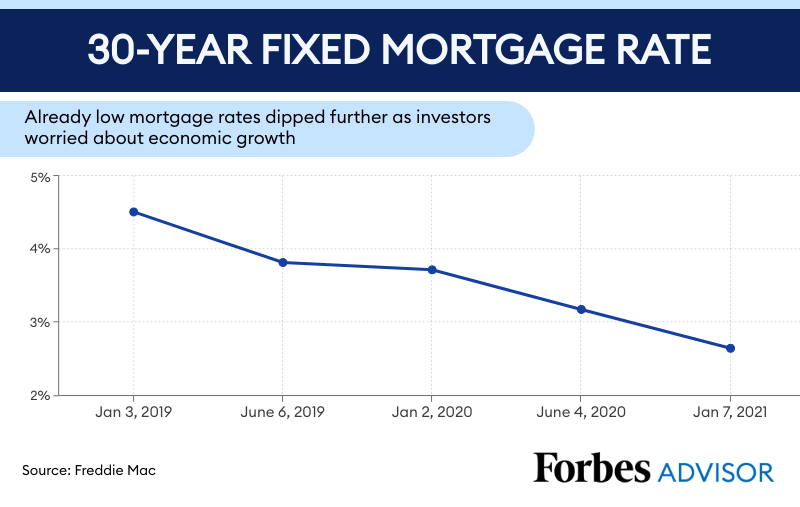 Cheap money meant that homeowners could refinance their mortgage and lower their monthly principal and interest payments, a huge boon for seniors living on a fixed income.

“Housing is the number one expense in retirement,” said Kelly LaVigne, vice president of consumer insights at Allianz Life. Households helmed by someone 65-years-old or older spent an average of almost $17,500 on housing, according to the 2019 Bureau of Labor Statistics Consumer Expenditure Survey, roughly 35% of their annual spending. 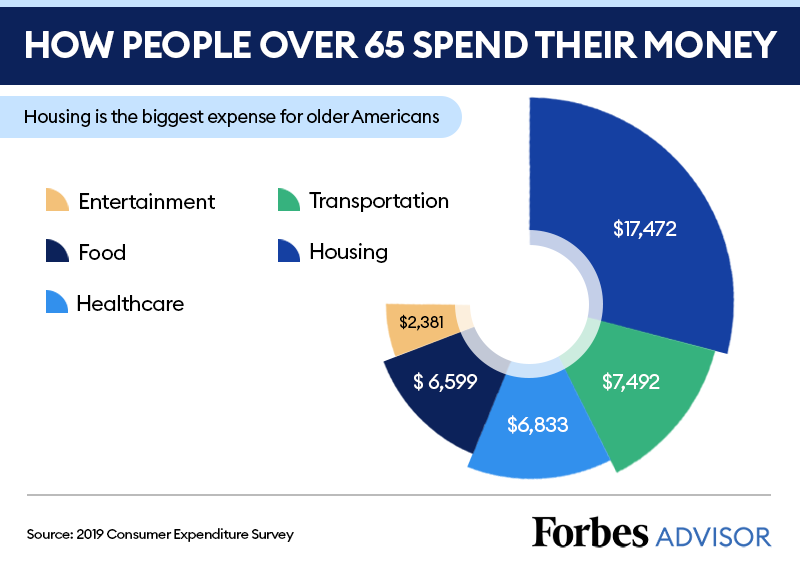 Older homeowners typically make up a large section of the refinancing market, according to the National Community Reinvestment Coalition: Those aged 55 and older account for almost half of refinancing demand.

These borrowers were able to take advantage of the refinancing bonanza: The Mortgage Bankers Association’s Refinance Index for the week ending January 1, 2021 increased by 100% compared to the same week in the year prior.

While the data above suggest the pandemic has not wreaked havoc on the nuts and bolts of retirement planning, you might wonder if the Covid-19 crisis has shaken overall confidence in retirement.

After all, the most dire health impacts of Covid-19 have been borne disproportionately by seniors. The CDC reports that more than four out of every five Covid-related deaths have been someone aged 65 or older.

But even here, there has been no marked decline in retirees’ confidence in their retirement prospects, nor did they become more pessimistic about what the future holds. Despite all that’s happened over the last year, the financial grit of America’s retirees—a key ingredient for financial health—held steady, especially compared to those who are still working. 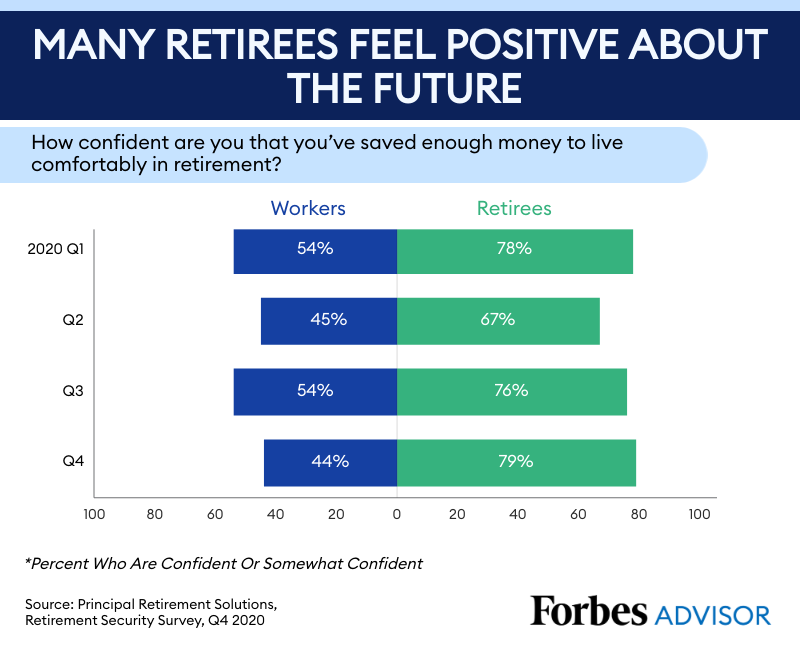 The Principal Retirement Security Survey found that almost nine out of 10 retirees (86%) said they were at least somewhat confident they’d have a positive state of mind in the next few months, compared to 71% of people who were still working.

Today’s workers are tomorrow’s retirees, naturally. But here’s another bright spot: Workers have done a great job saving money during the pandemic. This is thanks in large part to federal stimulus checks and increased unemployment benefits, which disproportionately went to people lower on the economic scale. 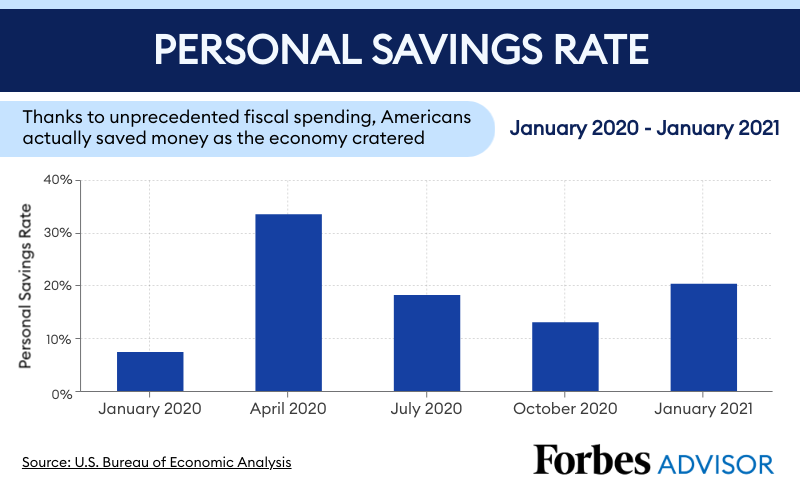