Financial markets rallied in December on the prospects and ultimate agreement of another tranche of Coronavirus stimulus.  Covid-19 vaccine emergency use approvals from the FDA aided market sentiment even as daily infection rates, hospitalizations, and deaths hit highs.  Economic data continued to be mixed but showed continued progress on the employment front.  December also ushered in another round of equity IPOs that were well received by Wall Street.  The UK and EU also finally announced that they had come to a post-Brexit trade agreement, which prompted European issues higher. 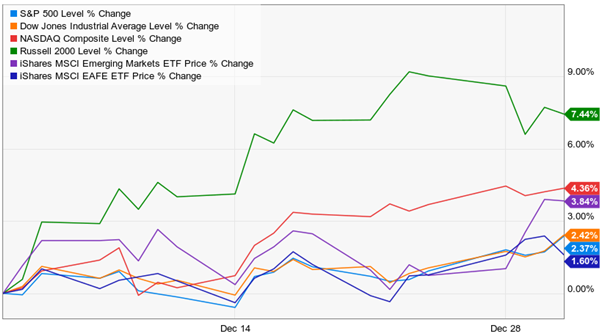 December saw a broad rally in the market with growth, value, cyclical, and small-caps issues showing excellent returns.  The S&P 500 gained 3.71%, the Dow increased by 3.27%, the NASDAQ added 5.65%, and the Russell 2000 led gainers with a return of 8.52%.  The US yield curve steepened over the month as longer-dated Treasury yields increased relative to shorter maturities.  The 2-year note yield fell two basis points to 0.12%, while the 10-year bond yield rose by eight basis points to close at 0.94%.  Gold prices increased by $112.4 or 6.3% to close at $1893.70.  Interestingly, Bitcoin, which has recently been seen as another proxy to hedge against inflation and a weak dollar, surpassed 30k.  Oil prices rallied over 6%, gaining $2.81 to close at $48.27 a barrel.  Emerging markets gained 4.92% for the month while developed international markets rose 2.59%.

Throughout most of the month, investors watched Washington negotiations on another coronavirus relief bill.  Ultimately, a bill tied to the government’s continued funding was agreed to and signed by the President.  The final package includes $600 in direct payments to households, $300 in extended unemployment benefits, and aid for specific industries such as the airlines.   The bill also saw an end to many lending facilities created under the Cares Act, and $429 billion in unused Cares Act funds were returned to the Treasury.

Covid-19 infection rates continued to soar over the month even as state and local officials announced further lockdown measures.  Officials also announced that a new strain of the virus had been discovered.  The new strain appears to spread much more quickly but does not appear to increase sickness or death.  Over the month, a light at the end of the tunnel appeared as the FDA and its global counterparts announced emergency use authorization of a few vaccines.  Inoculations started mid-month with front line healthcare workers and the elderly receiving the vaccine first. 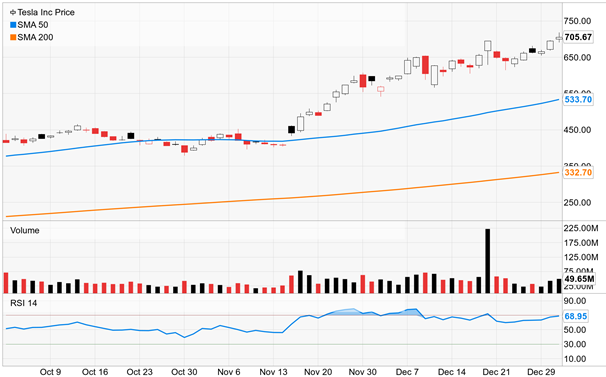 The month started with a disappointing November Employment Situation report that showed tepid payroll generation.  Throughout most of the month, Initial unemployment claims came in higher than expected, most likely due to the increased lockdown measures.  That said, Continuing Unemployment claims trended lower and hit the lowest level since March in its most recent reading.  The December Federal Reserve Open Market Committee meeting was as expected.  The Fed left the Fed funds rate at 0-0.25% and said they would continue to purchase 120 billion US Treasuries and Municipals per month.

The IPO market continued to sizzle in December.  Headliner, Airbnb, priced at $68 a share but opened to public trade at $146 and closed up 112% on the first day of trading.  Similar action was seen in Door Dash and AI C3.  This market action may give some reason for concern as some start to point to the lofty valuations within the market that now trades 22x forward earnings relative to the historical average of 15x.  The electrical vehicle space was also scorching during the month catalyzed by Tesla’s inclusion to the S&P 500. Tesla’s market capitalization is now more than the seven other largest automakers combined.

The information in this Market Commentary is for general informational and educational purposes only. Unless otherwise stated, all information and opinion contained in these materials were produced by Foundations Investment Advisers, LLC (“FIA”) and other publicly available sources believed to be accurate and reliable.  No representations are made by FIA or its affiliates as to the informational accuracy or completeness.  All information or ideas provided should be discussed in detail with an advisor, accountant or legal counsel prior to implementation. No party, including but not limited to, FIA and its affiliates, assumes liability for any loss or damage resulting from errors or omissions or reliance on or use of this material.

The views and opinions expressed are those of the authors do not necessarily reflect the official policy or position of FIA or its affiliates.  Information presented is believed to be current, but may change at any time and without notice.  It should not be viewed as personalized investment advice. All expressions of opinion reflect the judgment of the authors on the date of publication and may change in response to market conditions. Due to rapidly changing market conditions and the complexity of investment decisions, supplemental information and other sources may be required to make informed investment decisions based on your individual investment objectives and suitability specifications. You should consult with a professional advisor before implementing any strategies discussed. Content should not be viewed as an offer to buy or sell any of the securities mentioned or as legal or tax advice. You should always consult an attorney or tax professional regarding your specific legal or tax situation. Investment advisory services are offered through Foundations Investment Advisors, LLC, an SEC registered investment adviser.